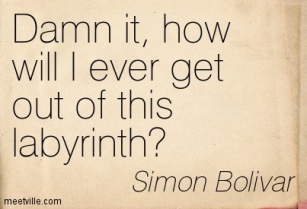 This poem came to me while reading ‘The General In His Labyrinth’, and as a result, this poem is a loose, poetic version of the legendary book. I’d appreciate if you could take out time to tell me how you felt about this poem.

Great stories were told,
Meetings put on hold.
The man who built the nation,
Now in shackles of defamation.
His decisions mistaken for tyranny.
Ever tiny move, a felony.
His ego collapsed on he ground.
The man he was- never to be found.
Drunk on power and yet so sweet.
His accolades-flawless. Not one defeat.
But unfortunate it is, he never learned.
Never had failure from which lessons he could have earned.
Romantic at heart, he charmed his way,
Under his spell, ladies swooned and swayed.
Men envied him, wanted to be him.
Awe and hatred filled them to the brim.
But now, all they have for him is pity.
As he marches out to forever leave the city.
But from this labyrinth, how will he out, dammit?!
“If only from the earth, he could vanish.”