I wish I was never born, I wish I was never like the way I am now. I wish I could disappear from the face of the earth, with my few essentials and maybe, Alex, and never see Adrian or Jules or Nick or anybody again. Ever since dad got kicked out, I’ve had many dreams of him, where we go to a secluded forest lake and fish till all the fishes are caught. Sometimes, I see a man with a blurred face, and me, only four years old, when this man comes and picks me up and takes me away. I am pretty sure that is dad. It’s just the way he was, so kind, so peaceful, so loving, and all now seems so unfamiliar, surreal.

I knew that my dad would come one day and save me from this damned world and carry me with him, to that secluded lake in the forest I dreamt of. But yesterday, I saw an entirely different vision. I dreamt that the trailer beside the lake where I and dad lived had been burned down, and there were echoes of raucous laughter in the forest. Jules and Adrian are standing there, looking down at me, not helping me or calming me in anywhere. Suddenly, dad emerges into the scene with a knife stabbed in his back, and he dies. He dies. Then I woke up, sweating hard.

I had been living in a bubble, a fairy tale, where everything turned out to be right at the end. Of course the truth now dawns upon me. This world that we live in is no more than a rat race, where everyone wished to be one step ahead of the rest. There are two ways it can be done, 1) Push the other behind you and 2) Run faster than the rest. Unfortunately for us, we prefer the first.

That is what Jules is doing. That is what everyone is doing. If the entire world’s an ocean, and the people on it are the fish, I’m sure I and Alex would be the deepest.

Jenny had a dreamless night and slept calmly.  A strange sense of lightness had crept in her heart that night, something she hadn’t experienced before. Last night was a mess, she thought. I can’t believe I cried. I have to stop acting like some weird, emotional chick, she decided as she showered. Putting on her usual white shirt, black jeans, and long brown boots, she thought of all the work that she was supposed to do. French class verbs, check. Maths trigonometry assignment, check. English questions, check. English…… Oh yes! Nick’s book.

Combing her hair, she searched for Nick’s book. She was already late. Uh, I’d say I didn’t find it, idiot! She grabbed her bag, and the car keys, climbed down the stairs, snatched the toast off the dining table, and exited the door, when she bumped into someone.

‘Oh hell!’ she said, as all her things fell out of her hands. She bent down to collect them, when knees in faded jeans came into view. ‘Are you crazy dude? Can’t you just walk properly,’ she scolded as she looked up. It was Nick. ‘What do you want? I said I’d hand over you book at school. There was no need for you to collect it.’

He just smiled and handed her all the papers that he had collected. ‘I know. While checking my bag this morning, I saw that we had exchanged our books, that I had yours-’

‘I know what an exchange is. Thanks.’ She interrupted, rather rudely.

‘I thought you might be searching for it, so I decided to drop by and hand it over to you,’ he said coolly, and rose up.

‘First of all, thank you for your consideration. But, to think of it, it might have been a consideration only if you had considered coming half an hour earlier,’ she shouted at the last four words, with her hands dusting her knees. ‘I have been looking for it everywhere. You stay clear of me, understand? And if I were you, I’d avoid dropping by,’ she said warningly. Storming ahead of him, she moved into her car and drove away.

‘I don’t know how I’ll manage in this town if all people are like this,’ Nick said as he made his way across to the car.

Jennifer never gave her sister the ride to school. She had enough friends to do that. What she was worried about today was the fact that Jules may herself ask Jenny to give her the ride. She didn’t want to hear how her date with Mark went and how Louise/Louisa, her so-called best friend happened to meet Jack secretly, behind the school walls. So on her way to school, she was silently congratulating herself on having managed to evade Jules for the rest of the day. That is how she did it. Congratulate. Eat. Drink. Talk. Work. Play. Celebrate. All silently. It was rare and uncharacteristic that she opened up to Alex. They were going strong, however, Jennifer understood Alex to be the dependent one, not the other way round. It would ruin the balance.

Ms. Adrian Foxx had married Mr. Brad Cruise, when she was barely seventeen, after a whirlwind romance at high school. Adrian never had imagined that she would have baby at nineteen, but Brad wanted it so much that she consented. Jennifer was born. That was the start of the bad times. Brad went into business and opened three casinos in Vegas. Most of his time went in work. He became successful and opened up four more franchises, three in the U.S.A. and one in Europe. He became busier, when suddenly one day, newspapers declared, “Cruise Casinos Fraud: $40 million at stake.” The next morning, Adrian woke up and found that their house had been stripped of all valuables and that Brad had cheated on her, and run away. What she told Jennifer was that Adrian and Brad couldn’t make things work and so Brad left them. Jennifer felt as though Adrian had kicked Brad out and she grew detached and suddenly stopped talking to her. Adrian, thinking that Jenny was not taking this finely, adopted Jules as she didn’t want Jennifer to be lonely.

Jennifer was thinking about her broken family when she reached school. She parked her car at her slot and waited for Alex to come. She took out her Maths question in the car and was about open it, when she heard a knock on the door. It was Nick. She groaned, not bothering to hide her frustration.

She rolled down her windows, ‘Didn’t you get what I said at the house today? ‘If I were you, I’d avoid dropping by’, right?’

‘Right, but you forgot this.’ He held his hand up, showing a battered, yellow diary. She snatched it out of his hands. ‘This is personal, how dare you touch it?’ she growled.

‘Simple, this fell from your bag when you turned. I didn’t read it.’ He watched her, fascinated, as she examined her diary. ‘So, you want to show me around?’ He asked, unperturbed by her anger.

‘Of course not!’ she said, surprised.

‘Why, you may enjoy my company,’ he replied, smiling. She glared at him with such animosity that his smile faded slowly, and he turned back, went away, muttering vehemently all the way.

‘What a weird guy,’ she commented, getting out of the car.

After numerous conversations, heated arguments and many debates later, I have arrived at the conclusion that I’m going to post pages from the story I had worked on for quite some time and is presently on a standstill due to infinite excuses. I’d started writing this when on September 16, 2014 after an idea hit me like thunder. I worked on it religiously for about a month or so, and then it started happening sporadically. Now, it is on a standstill. I’ve since then struggled to continue but nothing worth writing hits me. Maybe your feedback will help me to write further.

The response I get after posting the first 3-4 chapters will determine whether I continue to post the story or not.

So presenting to you the cover of Unravelling Broken Threads. 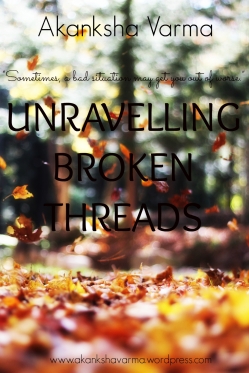 Unravelling The Threads is about a girl named Jennifer, whose mind functions on a frequency very different from her family. Her ego and status at school is hurt by Nick, who after repeated attempts to befriend her, challenges her to participate and win the school elections to be held the next month. What follows is Jennifer’s journey from a unpopular, arrogant, unfriendly person to becoming the most popular candidate in the elections, tracing her life, making friends and memories, in face of all that suffocated her inside. Friendship, romance and memories all come together to give a story worth reading and cherishing.

Gone Girl, by Gillian Flynn is a crime fiction that falls short of brilliant because of it’s ending. It is a story of Nick who has a troubled marriage with his wife, Amy. On their fifth marriage anniversary, Amy goes missing in the morning. Everyone suspects Nick. Their are strange searches on his computer, things ordered through his credit card that he didn’t actually order, his wife’s journal that shows she might’ve been afraid of him. Everything is bad for him? He says he didn’t kill her. So where is Amy?

Flynn has put a lot of detailing in the characters, each one more complex then the first. Nick is despicable. He is the sort of man you hate, pity and maintain a distance from. You may wonder what his story is, coming across him. Go, Nick’s twin sister, is more of a mother than a sister but possesses a motherly nature that is diffused slowly, without any extreme characterization.

The brilliance of this book is Amy, the pure evil. She’s cunning, manipulative, foxy, extremely smart. She’s s person with multiple identities, a person who has never shown her true face. She camouflages her true self, much of which was because of her parents’ business. They wrote books titles Amazing Amy, loosely based on what a perfect girl should do. Amazing Amy was always what Amy was supposed to be, but fell short of. Amy’s character has levels. She has a criminal mind, much of which has layers that never end. She is delicately complex, intricate in thinking and hard to imagine. She has a killer mind.

Gone Girl is amazing. It’s a peek into a sociopath’s mind. It’s racy. It’s a definite page turner… to disappointment. It’s a bad ending. It’s a good read it you don’t mind an upsetting ending. Still, if you like crime fiction, go for it! The story will stick with you. And movie’s come out too!