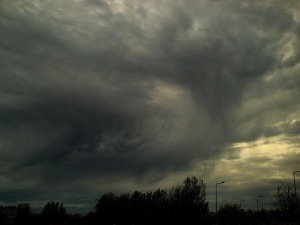 The raging tempest, howling winds.
Somewhere overhead, the shatter of glass.
Gloom, despair, loneliness, it brings,
Tilting the- and breaking- blooming table vase.
Ferocious sounds, bringer of sands,
Forcing people both within and out.
Carrying the vicious melody of some faraway lands,
Birds helplessly- their homes-scout.
And the blast beruffled hair,
Sticks, rogue leaves, and stones and grains,
Stripping tall trees, leaving them bare.
Creating high and low sandstorms in the plains.
And the grey high ceiling, dark and overcast,
Today hangs low and without
The usual gaiety, bright yellow blast,
Turns paler like suffering from a fever bout.
And suddenly the clouds scatter to give
The adamant first ray of sun.
Inching slyly towards all those who live:
Slowly at first, then quick as a gun.
And the winds settle calm and cool,
Silence that lends from the eye of storm.
Everything a nature’s joke-mean and cruel,
No one wonders where it originated from.
The birds befriend the winds and they
Find their way happily.
Everyone without finds a reason to stay,
A spasm of nervousness and then laughter hysterically.
The nature mocks and scolds and waves,
And shows the one in control, in such horrendous gales.
No one survives- not a coward, nor a brave,
When nature takes, in his hands. the sails.